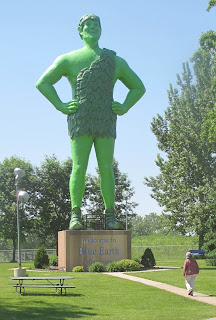 I'll bet that almost everyone recognizes this advertising icon! The Green Giant (he didn't become jolly until later) was the brainchild of an advertising executive from the Minnesota Valley Canning Company from LeSueur, MN in the late 1920s.  He was not an overnight success and it took a couple of redesigns before he shed his scowl and bearskin outfit to become the smiling, leafy mascot we know today. The canning company took his name in the 1950s and now Green Giant is a vegetable processing subsidiary of food giant (no pun intended) General Mills.
I'm the little person in the foreground, walking up the path to visit this 55-ft. behemoth which is located at the midpoint of Interstate 90 Blue Earth, Minnesota. Arthur and I were two of the 10,000+ folks who visited this small park in Blue Earth, Minnesota last year.
As I scanned through the photo library to retrieve a photo to accompany this post, I was originally looking for a picture of me standing up on the pedestal with the Giant. However, this picture really better tells the story. We're the little guys, carefully tending our vegetable patches and orchards in the shadow of the giants.

That's funny. We were just asking our kids if they knew the "Ho Ho Ho, Green Giant!" quip.