The weather rollercoaster we've experienced in northcentral Pennsylvania this year is forecast to continue this week with temperatures in the 50s tomorrow followed by several days in the 20s.
The good news from my perspective is that some of the snow and ice has melted and the mud left in its place has frozen again.

As many of you know, Arthur had bilateral knee replacement surgery last month and he's been working hard at the business of recovering by doing his exercises and following the orders of his caregivers.

On Friday he made his way carefully to the cellar where the potatoes are stored and helped me figure out his system as we filled two orders, including a delivery to Costa's ShurSave Food Shop in Coudersport. Those of you who have missed the colorful assortment of organic potatoes can now find them again.

We're also supplying our organic potatoes to the Genesee Environmental Center for their Sunday breakfasts. In fact, we need to put together another shipment for later this week. The Crittenden also uses our potatoes regularly.

At the same time we're finishing up with the 2014 season, we've been working toward the future. This quiet time has allowed us to devote blocks of time to work on our Organic Systems Plan and put together plans for the 2015 growing season.

The seed orders have been placed and many have arrived. I'm excited about growing some new tomato varieties as well as some different peppers. I have yet to find a sweet bell pepper that fits our growing season though some of the old-fashioned Italian varieties have done well in the high tunnel and taste superb.

There are some new apple trees stored in the cellar waiting for the snow to melt in the orchard. I've spent some time in the high tunnel getting ready for the coming year. Temperatures in there have been measured at 85+ degrees on sunny afternoons while the snow is piled high against the sides. The overwintered spinach had a drink of water last week and has begun to come to life again.

I continue to be intrigued at four season growing, especially after attending a workshop offered by Clara Coleman at the PASA conference this year. Many of the seeds I ordered are on the list of cold-hardy crop varieties she recommended. 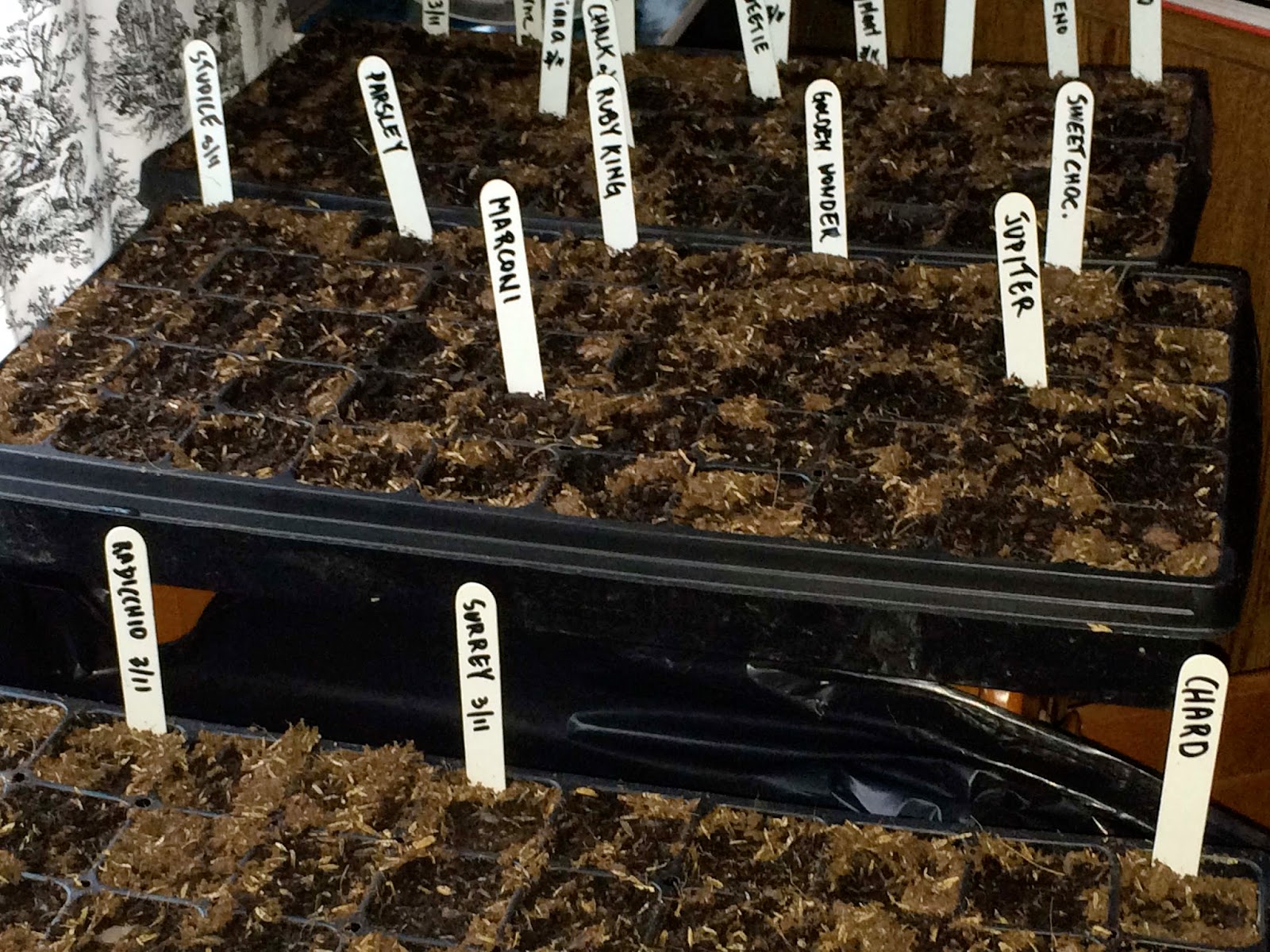 I couldn't resist starting a few plants (200+) even though the water in the greenhouse is frozen and the project had to be moved inside the house. I took this picture yesterday but today there are a few lettuce seedlings poking through the Organic Mechanics seed starting mixture! They'll have to go under the grow lights in the next couple of days.

If you're driving by here, you may notice this silhouette in the window watching over my seedlings. This particular statue was a gift from Kathryn Schaub Thompson, a neighbor and friend. It's known as a Kokopelli. 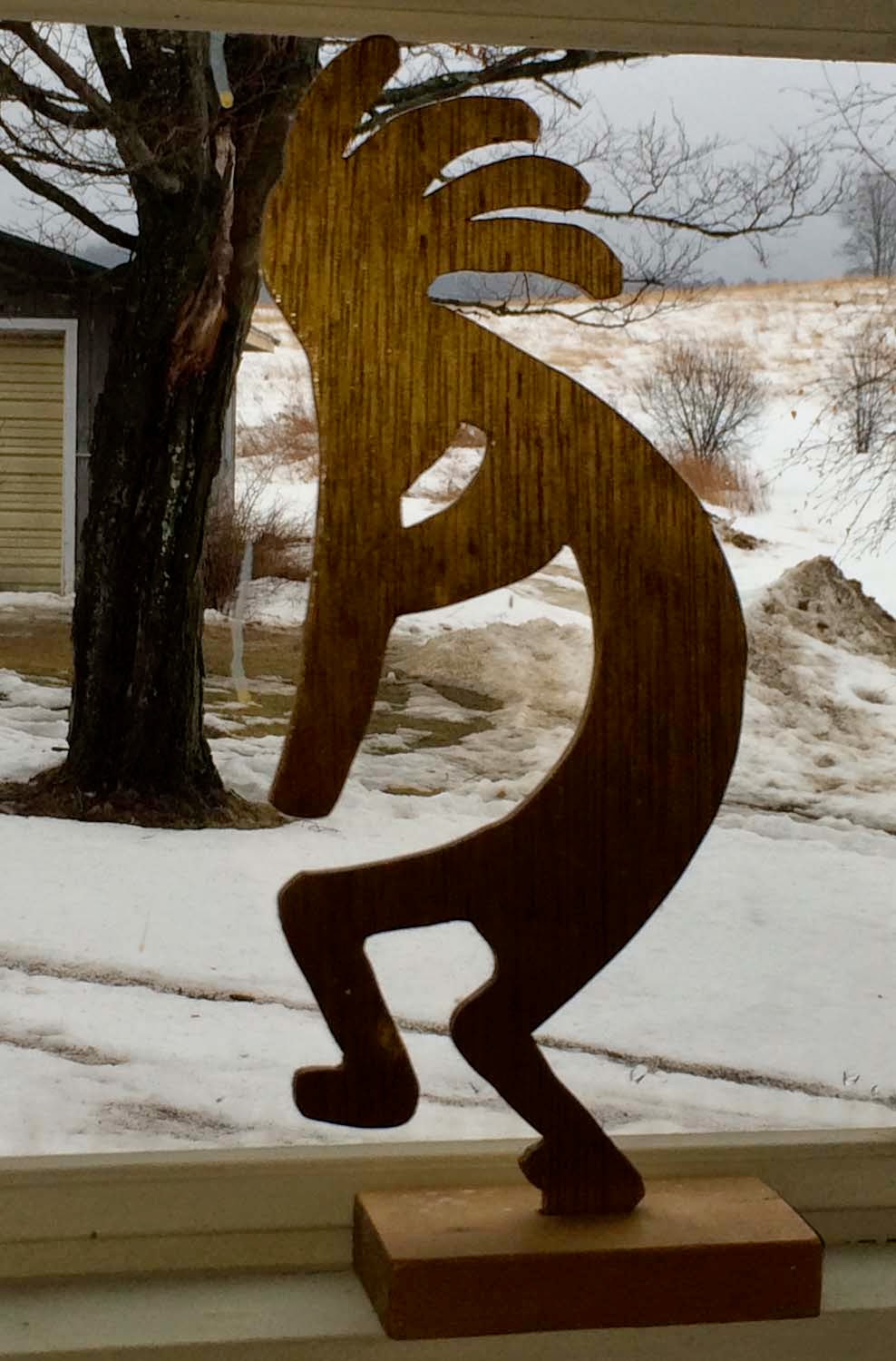 While there are many legends about Kokopelli and his origins in the desert southwest, I like the one that tells how he went from village to village to bring the change from winter to spring, melting the snow and bringing rain for a productive harvest. It is also said that he carried sacks of seeds and songs for his flute in the hunch on his back.

Kathryn (and husband Bill) moved from our neighborhood years ago and finished their days in Coudersport but maintained close ties to Crandall Hill. I don't know if Kathryn knew the fertility legends when she presented this to Arthur. She wanted him to have it based on Kokopelli's joyful song and dance but I think she'd smile to think we're still enjoying it.

Posted by Jane Metzger at 4:16 PM No comments:

Ahead Of The Culinary Curve?

This month's Martha Stewart Living magazine features a cover photo that could have been styled with vegetables grown on Metzger Heritage Farm.
The yellow, red and purple carrots paired with stems from Rainbow Swiss Chard make a beautiful picture.


In 2014, we scoured the seed catalogs to find varieties of vegetables that would thrive in our region and would provide our customers (and our family) with high quality, organic, locally-grown produce that tastes amazing.
Are you looking for an opportunity to be able to source the kinds of vegetables you see in cooking magazines or on the Food Network? Look no further than Metzger Heritage Farm.
We've decided to change our business model for 2015 and are planning to allow our customers to pre-order their organic vegetables. With this plan, we are not going to be regularly participating in the Farmers' Market. Watch this space for more information about how you can pre-order your vegetables for pick-up at the farm or arrange for delivery.


Posted by Jane Metzger at 2:28 PM No comments: