I was interested to see several references to purple potatoes (and several other vegetables we grow) in the April 2014 edition of Better Homes and Gardens magazine.
A beautifully-illustrated piece on "Rainbow Crops" hyped the nutritional benefits of brightly colored vegetables. Purple potatoes were listed among "crops rich in anthocyanins (currently being studied for their anti-inflammatory and anti-cancer benefits)."
Among the Easter dinner recipes I found "Garlic Potato Rolls" which called for 8 oz. of cooked purple potatoes, mashed.
The United States Potato Board advertises the benefits of potatoes with a full page ad in the magazine. Don't those potatoes look a lot like the Gourmet Organic Potatoes we have for sale at Costa's ShurSave Food Shop in Coudersport?
We still have a limited supply of purple potatoes (and some of our other varieties) from last year in storage. If you'd like a supply of a particular color (like purple), contact us soon (email: metzgerfarm@gmail.com) or by telephone.
Here's a picture of the beginnings of the 2014 potato crop snapped last week. 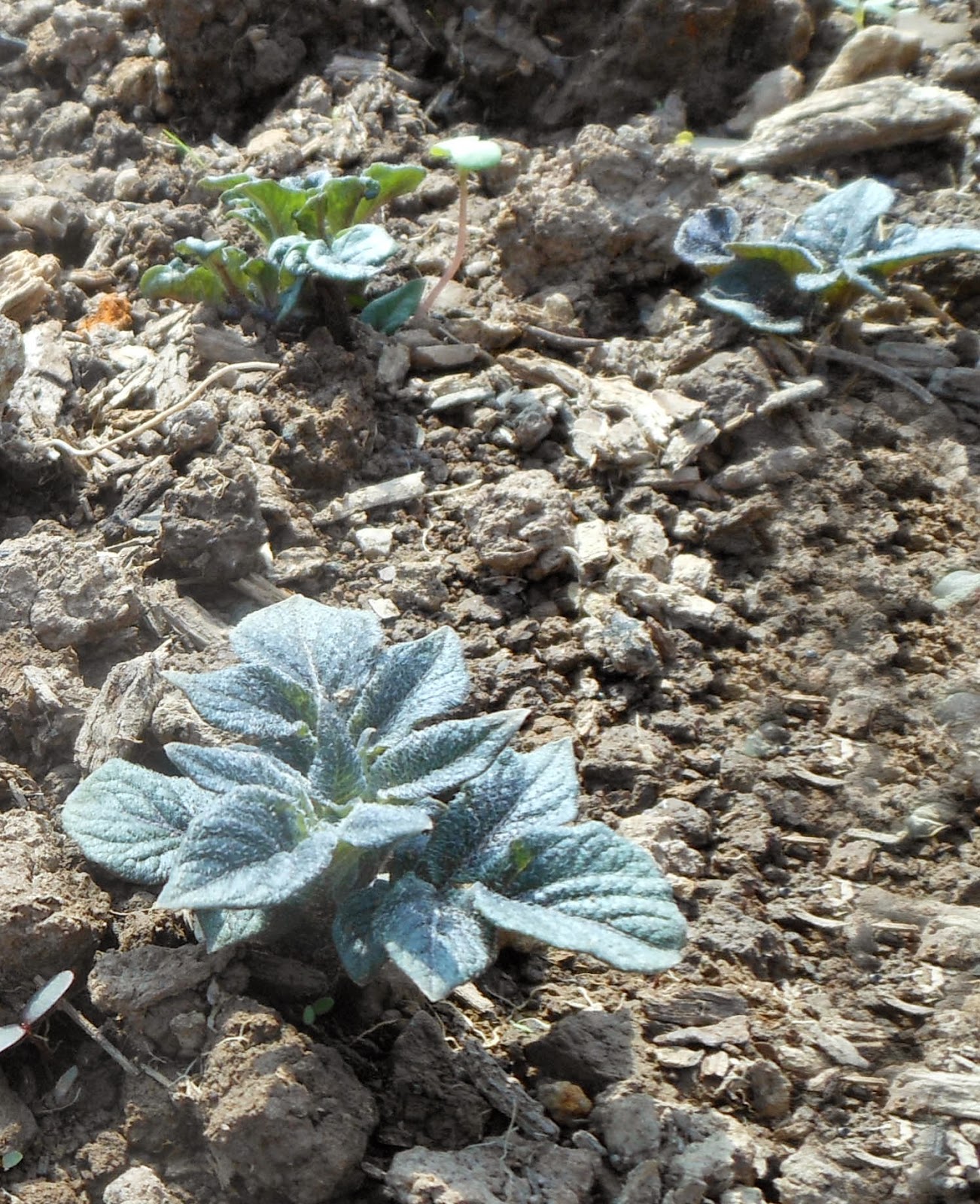 Posted by Jane Metzger at 10:37 AM No comments: 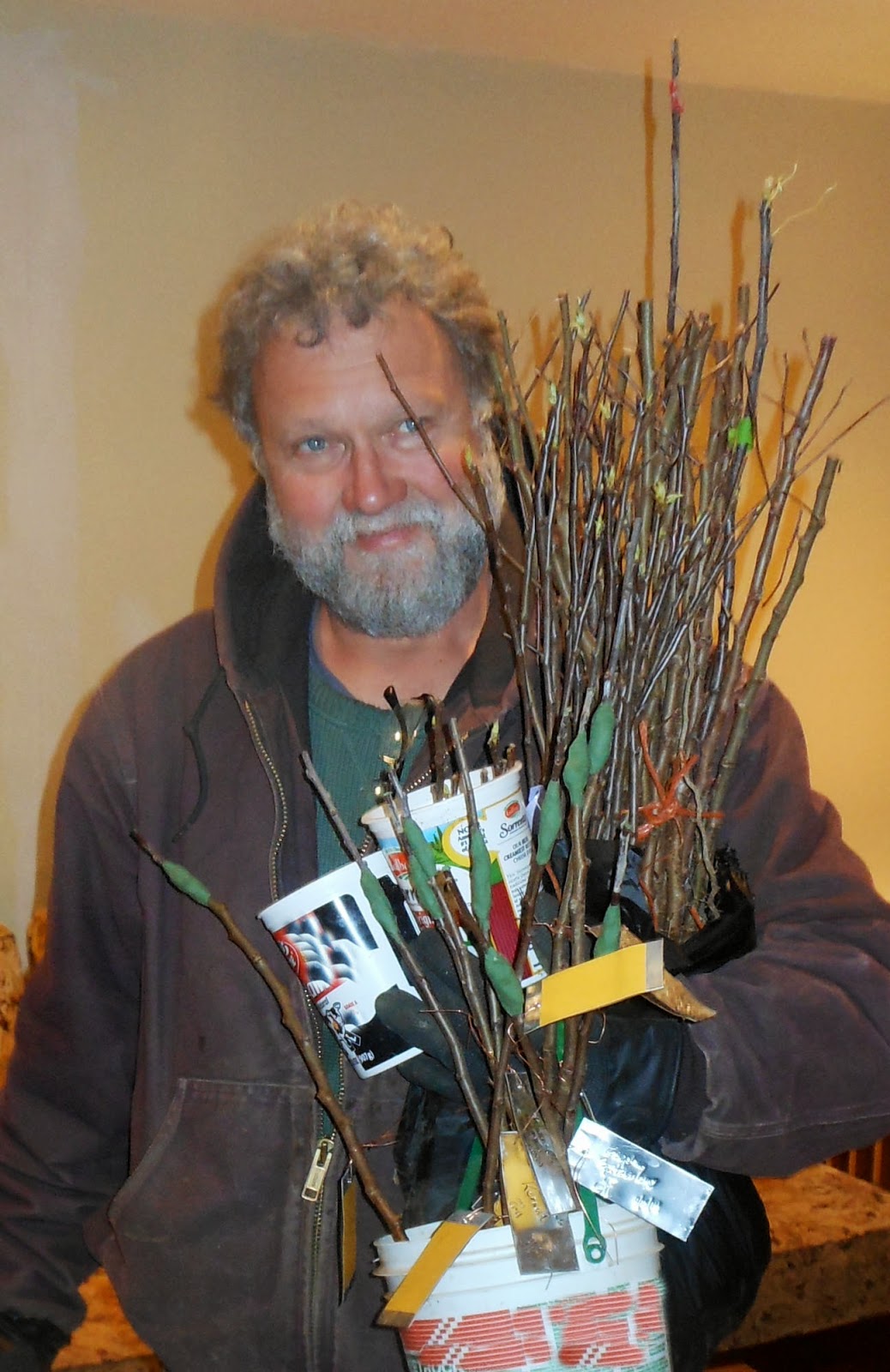 I've discovered that the winter seems endless and when the sun has finally warmed the earth, time begins to speed up with an ever-growing number of items on my to-do lists.
Arthur's been working in the orchard, putting into practice some of what he's learned in workshops, conversations with others and various books. With assistance from brother-in-law Roger Wilkerson who spent a few days visiting from Oregon earlier this month, he has refined the trellis system for the dwarf trees planted two years ago. If you've seen Arthur sitting on the ground inside the orchard, now you know he training the branches along the new wires strung for that purpose.
He's also been harvesting scions for grafting (note the Kevlar gloves he's wearing since last year's unfortunate accident with a grafting knife).
He's also prepared many of the beds in the high tunnel for my planting efforts – potatoes, chard, beets, carrots, radishes, lettuce and shallots. We have cover crops – red clover and peas – planted in the long beds and those will be turned over into the earth when it's time to begin transplanting tomatoes in a week or so.

The peas have begun to go into the ground and I know many of you are looking forward to seeing them at the Farmers' Market in early July!
We plant Alderman (tall telephone) peas. This heritage pea is the variety planted by Arthur's parents, grandparents and great grandparents.


From the Victory Seeds online catalog comes this interesting tidbit: "The history and pedigree of 'Alderman' is a bit sketchy.  This is not uncommon when researching very old varieties but here are the facts that we do know.  In 1878, Carter's of London, England released a variety called 'Telephone' that was a sport of the older variety, 'Telegraph'. There was a lot of variability in 'Telephone's' genetics.
"At the time that it was introduced into the United States, light-colored pods were popular. But as public preferences changed in favor of darker pods, growers started selecting seed stock from the darker-podded variants of 'Telephone'.
"Then in 1892, Thomas Laxton of Bedford, England released 'Alderman'.  It possesses many of the same characteristics as 'Telephone' but appeared to be more uniform.  W. Atlee Burpee introduced it into the U.S. market in 1901. By the mid-1930s, 'Alderman' had nearly replaced 'Telephone' or was being marketed as 'Dark-Podded Telephone', 'Tall Telephone', or simply as 'Telephone' with no apologies.  "By the way, the word "Tall" was added to the name in the early part of the 20th Century simply to distinguish it from a variety that had been introduced called, 'Dwarf Telephone'. "

Organic Alderman seed is impossible to find so we've been saving our own seed for several years. There's something especially satisfying about putting those special seeds in the ground each spring.

When a bunch of farmers get together this time of year, the conversation almost always turns toward the weather. We're in consensus when we lament the late spring this year. I almost don't dare to look at the 10-day weather forecast since the last time I looked past the promised 70-degree temperatures this weekend, I saw snow and ice pellets in the mix for early next week. Sigh.....
Last year we beefed up our indoor planting schemes to enable a head start on the season. It was the first week of March when I started my first seeds indoors this year under the grow lights in a sunny upstairs bedroom window.
I start my seeds in trays with Organic Mechanics Seed Starting Blend and then replant the seedlings in individual pots with Vermont Compost Company Fort Vee Compost-Based Potting Soil. I've found this combination gives my plants a good start before planting in the high tunnel or outdoors. 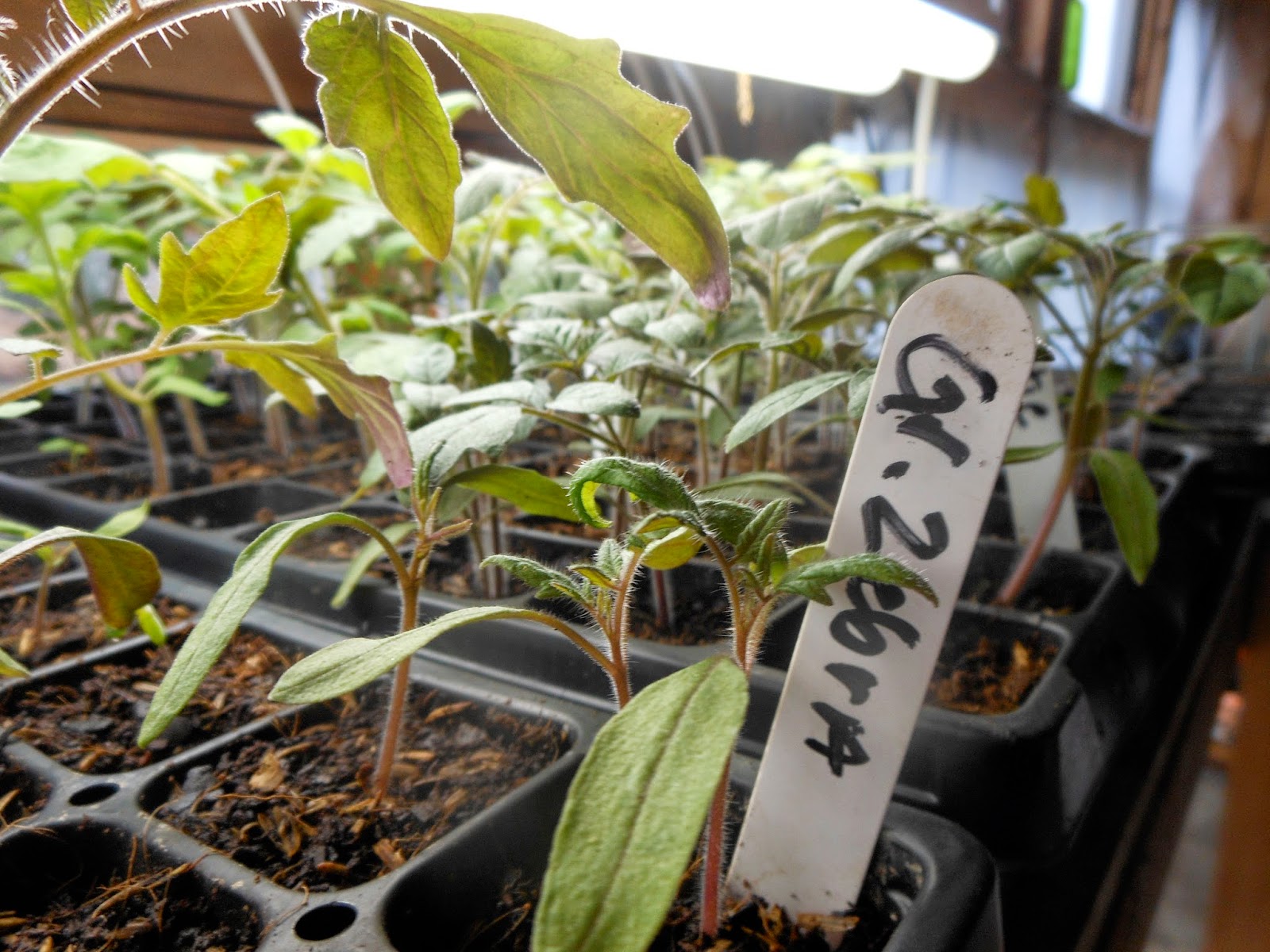 I vowed this that I wouldn't start as many seeds this year but when I look around the greenhouse, I do believe I may have overdone it again! Of course, when late summer rolls around, we'll all welcome a harvest like this! 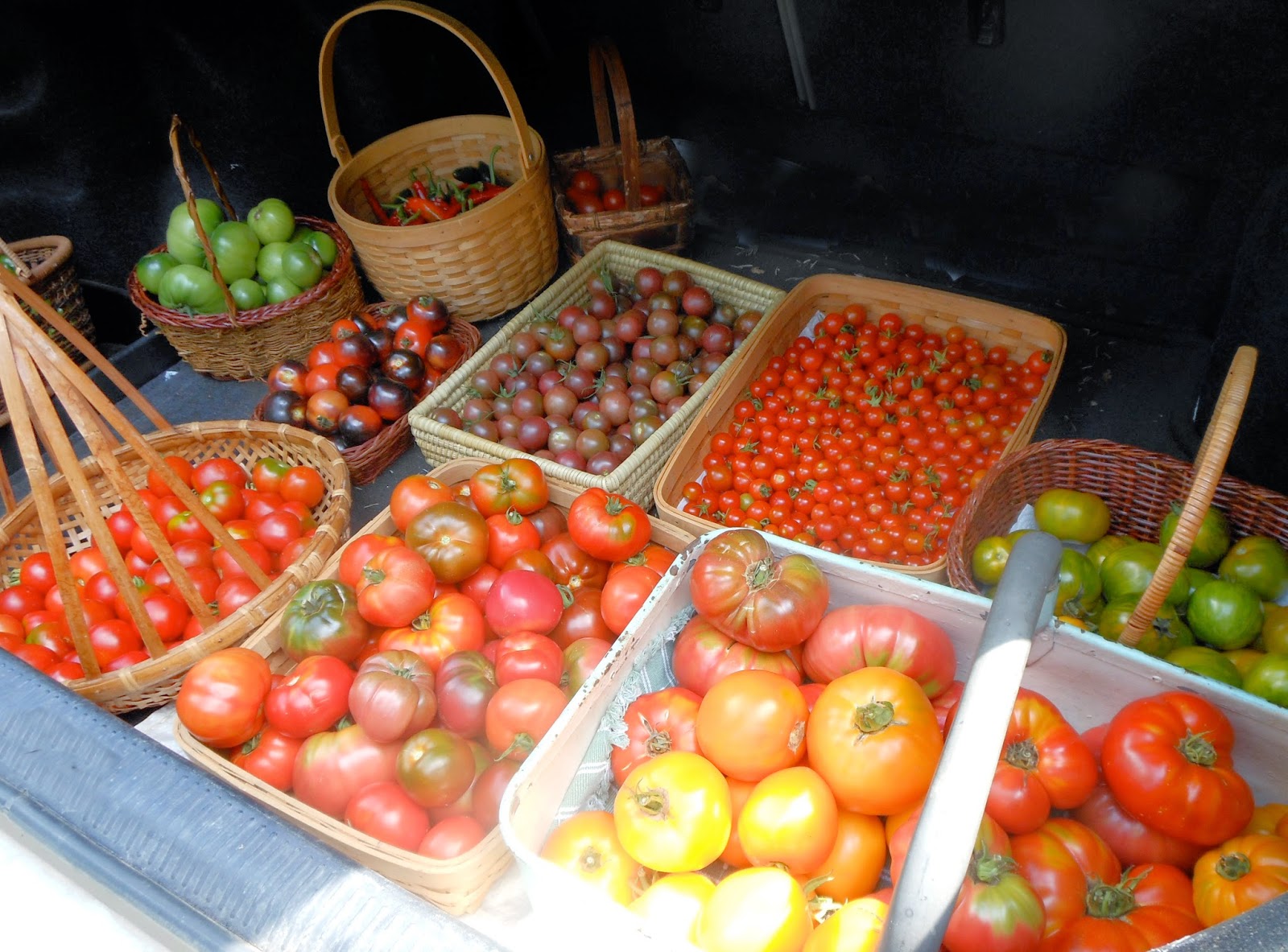 Posted by Jane Metzger at 3:39 PM No comments: