"Flail Was Tool Of Pioneer Days"

The winter months sometimes allow a little extra time for me to work on a project that has been in the works for many years. - compiling reminiscences written by my grandfather, W.D. Fish, known as "Golly" to those who looked for his column in the weekly newspaper.

Born in 1875, he lived in Allegany County near Whitesville during his youth and that's where he was bitten by the printing/newspapering bug. He worked for many area newspapers and print shops. He wrote a book (which was never published) about his time in Cross Fork in the early 1900s. But in the 1920s, he made Coudersport his home and The Potter Enterprise his newspaper.

Golly continued working at the newspaper until shortly before his death in 1969 and in the later years especially, he penned pages and pages of stories, written in pencil on now-yellowed newsprint. My mother squirelled them away and now they've made their way to me. And such treasures!

This particular piece was in a folder marked "filler" and here's the introduction page as I found it. It was likely written in the late 1960s. 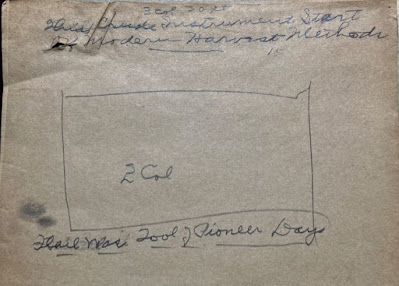 It seems to fit well with my stories of this old farm. Though Arthur tells me he has not come across a grain flail, we do have a grain cradle from the old days. 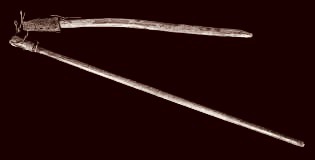 The instrument pictured in this photo is the forerunner of the modern grain combine. It can hardly be designated as a machine but more correctly as an implement.

It is a simple invention that did service for the farmers of one hundred years ago. Today there are few people who could give its name or have any idea of its use.

It is a flail. It was used in the early days to thresh grain such as wheat, oats, barley, millet, buckwheat and other grains. It was a slow but effective way of separation of the grain from the straw.

The handle was perhaps four feet in length. The shorter piece of wood fastened to the handle with a loose toggle, probably of buckskin, was called a whipple or swingle.

The grain was scattered over the barn floor some six inches in depth. The operator moved the handle enough to let the swingle strike the straw to release the grains. The straw was removed and the grain, heavier than the straw, remained on the floor.

There was chaff and broken pieces of straw mixed with the grain. To remove the chaff it was tossed in the air when there was wind and the light refuse was blown away while the grain, being heavier, fell back to the floor. At a later date the fanning mill was invented to clean the grain.

Still later came the threshing machine, the first powered by horses on a treadmill. The grain in bundles was hauled to the barn when dry. It was run into a rapidly-revolving cylinder with spikes which separated the grain and a fan carried away the chaff and straw. The grain came from the machine in a spout. Burlap bags were fastened to the spout and filled to contain the grain for storage.

The next improvement in threshing was steam power which hauled the machines know as "separators" and provided the power to thresh at the various farms of the neighborhood.

"Having threshers" was a day of activity on the farm, even until recent years.

A goodly crew was necessary to operate an operation successfully. Sometimes the farmers hired extra help and the thrashers, as they were called, had have a meal or two. It was up to the housewife and often a wife or two on nearby farms came to the rescue. The men worked hard and they were hearty eaters.

As a side light of those earlier days, the writer remembers hearing the comments of a man who worked one season on a traveling crew. Since fresh meat to feed the thrashers was often not to be had, the farm wife could always prepare a sufficient number of hens to provide food. For those traveling with threshing outfit, chicken became too much of a good thing. In those old days, one thresher declared that when asked a question he either cackled or crowed in response.

Today as one sees pictures of modern combines in the west, traveling northward driving the harvest of thousands of acres as the grain matures, he should hesitate a moment to think it all started with that simple little implement, the flail.

I never realized there is a day set aside on the calendar each year to celebrate apple cider. But there is and it's November 18. 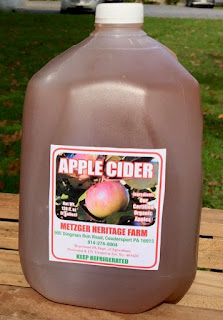 Posted by Jane Metzger at 2:00 PM No comments:

The bird feeder hangs empty, waiting for someone to fill it this fall though the birds seem to be satisfied picking at the leftover drooping seed heads on the sunflowers. There are a couple of chickadees that make their way into the high tunnel and greet me when I make my daily visit there.

It's cider season here on the farm - in case you haven't been following my posts on social media. The apples made their journey to the cider mill in nearby New York State on Friday and many of the crates of apples stored in the cooler have been replaced by crates full of the very special apple cider we craft every year.

This year's version seems to be extra sweet - a factor of a summer with limited rainfall. That little bit of information was related to us last evening as we met Aaron Rush, the owner and winemaker for Innerstoic Wine and Cider Company.

Aaron loves everything apple and as we chatted at the Halloween Open House at the Potter County Artisan Center where he was hosting a wine tasting, his love of his craft was obvious. We're excited about talking more with him and perhaps finds ways to share our apples with him in the future.

But meanwhile, act now to get your fresh apple cider. While much of the pressing was reserved for those who ordered in advance, the refrigerator in our makeshift self-serve farm stand is stocked with cider you can take home for $8 a gallon. Buy 5 and pay $35. 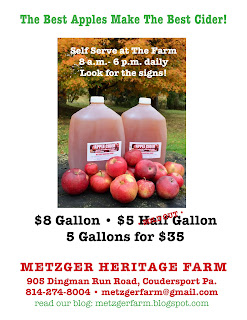 Posted by Jane Metzger at 10:01 AM No comments: 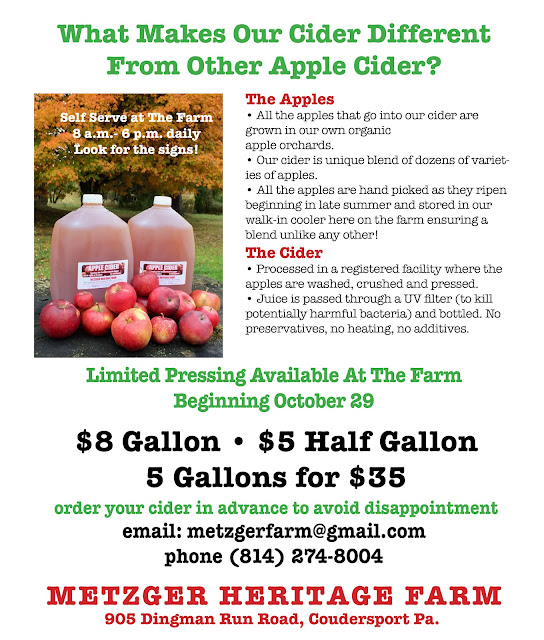 Arthur was up well before dawn to load the apples onto the truck for their journey to the processing facility in nearby New York State. We're excited to taste the blend this year. It seems to us that growing conditions this year have resulted in apples that are especially delicious - and sweet!

If you missed the opportunity to pre-order your cider, there is a limited supply that we will be putting out in the makeshift farm stand tomorrow (Oct. 29) and we'll open the doors daily at 8 a.m. until it's gone.

Posted by Jane Metzger at 8:26 AM No comments:

We've been pressing cider to sell for several years now.  And cider starts with the apples. Our cider is crafted exclusively from organic apples we grow here on Crandall Hill.

Why organic? First of all, organic is our personal choice for most of the produce we eat. The Environmental Working Group (from their website: "We've spent the last three decades bringing you breakthrough research and education so you can make smart, healthy decisions.") puts out a "dirty dozen" list that identifies the produce with higher concentrations of pesticides. Over 90% of apples tested positive for at least two or more pesticide residues. Choosing organic apples is one of the best and most efficient ways to reduce your pesticide exposure.
The best fruit makes the best cider. Harvest begins in late August and continues through late October. Apples are refrigerated in our walk-in cooler immediately after harvest. And one cool early morning, they're loaded onto the truck to make the trip to the processor. 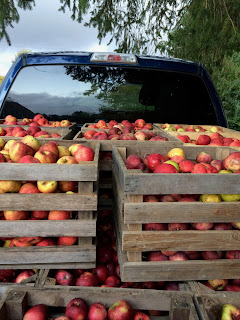 The apples are brushed and washed, then ground up, pressed, UV processed and bottled. Keeping the cider in its natural state with nothing additional added ensures all the flavor, nutritional value and vitamins of 100% pure apple juice.
Cider will be pressed on October 28 and available beginning that afternoon. There is a limited supply so it's best to order in advance to make sure you can enjoy the best tasting cider around!
Call 814-274-8004 (this is the landline at the farm) to place your order. You can also email: metzgerfarm@gmail.com. Deadline to place your order is Thursday, October 27. Cost is $8 per gallon, $5 half gallon. When you order in advance, we offer 5 gallons for $35. 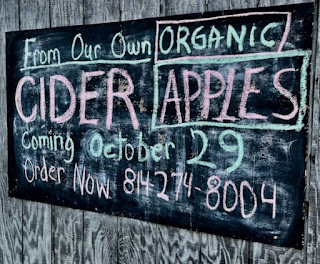 Posted by Jane Metzger at 9:02 AM No comments: 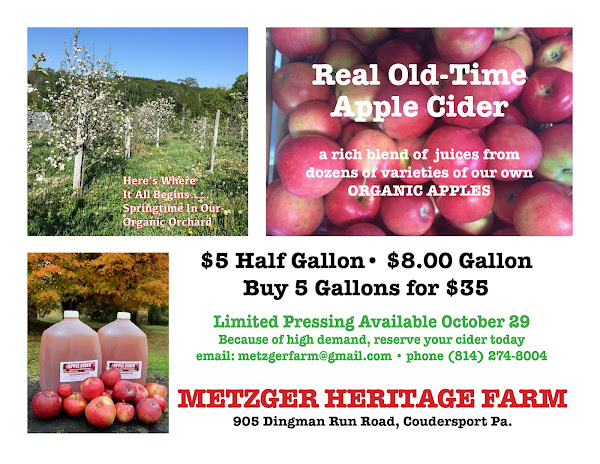 Posted by Jane Metzger at 7:54 AM No comments: 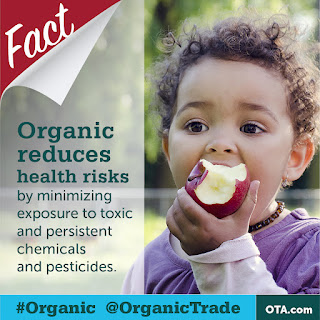 While you may pay a little more for our cider, you are getting a product that limits your exposure to the persistent chemicals and pesticides in commercially-grown apples.

Our cider is processed at a licensed facility and passed through a UV filter that kills pathogens without heat.

Order today by emailing metzgerfarm@gmail.com or calling our landline (814-274-8004) where you can leave a message if we can't answer. Cider will be available beginning in the afternoon on October 29. It's best to pre-order your cider to avoid disappointment because we have always sold out.

Posted by Jane Metzger at 8:31 AM No comments: