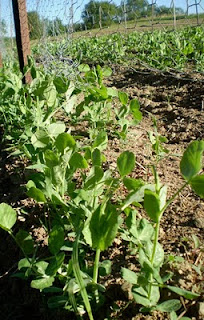 I hear the low hum of the tractor as sunlight streams in the window by my desk. Arthur has been our since sun-up tenderly burying seeds in the nurturing soil. He's planting sweet corn now. We've chosen two varieties from Seeds For Change. We're planning to keep the weeds at bay thanks to our cousin Timmer who has fabricated a uniquely designed cultivator. I'll post some photos of the "Metzgervator" in action when the time comes!
What do you think of the peas? They're being trellised for ease in picking. We'll have them for sale - either as a pick-your-own or we'll pick them for you. In my mind, peas fresh from the garden are very special. You just can't go to the supermarket and find them in all seasons like other commercially-produced vegetables. Be sure to reserve yours now. I'll keep you posted as we near the harvest times.
Posted by Jane Metzger at 9:08 AM No comments:

The news media, with its penchant for teasingly incomplete reporting on "health" issues, has been buzzing with the latest "explanation" for the increase in ADHD in children - pesticides used in the farming industry.
We've all allowed ourselves to be lulled into a sense that government regulators are the ones who really have a handle on what's safe and what is not. And we blindly trust those who assure us that those who handle these pesticides have been trained to "properly" apply the poisons to our foods.
What’s On My Food? is a searchable database designed to make the public problem of pesticide exposure visible and more understandable. I recommend this link as you might begin to explore an understanding of what is really on – and in – your food.
www.whatsonmyfood.org.
I'm moving Food, Inc. to the top of my Netflix queue. This documentary about agribusiness was recently shown on PBS and I could watch only the first hour before experiencing overload! This link takes you to a page with 10 simple things you can do to change our food system. Of course, near the top of the list is finding a local source for fruits and vegetables!
www.foodincmovie.com/get-involved.php
Posted by Jane Metzger at 8:13 AM No comments:

The weather roller-coaster continues here on Crandall Hill. After a weekend of sunshine and warming temperatures (I missed the nice weekend weather as I headed to North Carolina for the wedding of my cousin's daughter in Winston-Salem), we've been under the clouds and feeling the familiar damp chill again. The weather prognosticators promise a warmer day today with sunshine tomorrow. I hope they're right!
Posted by Jane Metzger at 6:32 AM No comments:

Metzger Farm Blog In The News!

This week's Endeavor News features a front page story about local farmers and their efforts to market their products by using the internet. And there I am on the front page, using my laptop in the new greenhouse. It's an interesting article and I appreciate having the opportunity to bring my blog to a wider audience. So if you have come here from the Endeavor, welcome!What doesn't show in the background of the photo is our  satellite dish that brings us internet from Hughesnet. Those of us in the country, away from the access to cable or high speed internet through the phone lines, must rely on satellite if we're blogging. Heavy frost last night makes me reluctant to go outside to see what may have been injured by the 28 degree temperatures that greeted us this morning. I am particularly concerned with the apples.
Posted by Jane Metzger at 11:29 AM 1 comment:

I've heard it for years . . .  "will the rain will spoil the rhubarb?" Is it just small talk or does it have some other meaning? Well, it's raining as I write this and I wonder . . .
As promised, here's another way to use rhubarb . . . and if the rain doesn't spoil it, we can harvest to your order!
I've been making this rhubarb crisp for years and it's always a success at potlucks. I imagine one could include strawberries when they're in season as well. I've also used the basic recipe and substituted blueberries (cutting down on the sugar, of course!).
1 1/2 cups whole wheat flour
1/2 cup unbleached white flour
1 1/2 cups brown sugar (packed)
1 cup rolled oats (either quick or old fashioned)
1/2 cup oat bran or wheat bran (if you don't have it, substitute another 1/2 cup of oats)
2 tsp. cinnamon
Combine above ingredients in a large bowl. Add 10 Tb. melted butter and stir to make a crumbly mixture. Press half the mixture evenly on the bottom of a 13 x 9 baking pan.
Cut 2 lbs. (about 8 cups) rhubarb (cut into 1-inch pieces) on top of of crust.
Combine 1 3/4 cup granulated sugar and 1/4 cup cornstarch in medium saucepan. Add 2 cups water and heat to boiling. Boil, stirring constantly, until thickened. Remove from heat. Stir in 2 tsp. vanilla. Pour over rhubarb.
Sprinkle remaining crumb mixture over rhubarb and bake in 350-degree oven until bubbly around the edges (about an hour).
It's wonderful served warm with a scoop of vanilla ice cream or a dollop of whipped cream.
I've also made a half recipe and baked it in a 9-inch pan.
Posted by Jane Metzger at 7:17 AM 2 comments:

If you're interested in some rhubarb, please let me know. I'll be happy to pick it fresh to your specifications.
I'll be sharing my recipe for Rhubarb Crisp in a future post.
Posted by Jane Metzger at 5:22 PM 1 comment:

It's really spring when the rhubarb is ready! Here on our farm, we have a healthy rhubarb patch, planted many years ago at the far end of the garden. Most have enjoyed rhubarb baked in a pie. Here's a recipe for an unusual use for "pie plant" – Rhubarb Chutney
3/4 cup sugar
1/3 cup cider vinegar
1 tablespoon minced peeled fresh ginger
1 tablespoon ground garlic
1 teaspoon cumin
1/2 teaspoon ground cinnamon
1/2 teaspoon ground cloves
1/4 teaspoon dried crushed red pepper
4 cups 1/2-inch cubes fresh rhubarb (about 1 1/2 pounds)
1/2 cup (generous) chopped red onion
1/3 cup dried tart cherries or golden raisins (about 2 ounces)
Combine first 8 ingredients in heavy large pot. Bring to simmer over low heat, stirring until sugar dissolves. Add rhubarb, onion and dried cherries and cook until rhubarb is tender and mixture thickens slightly (about 5 minutes). (I find this takes longer than the five minutes mentioned in the recipe but plan on watching and stirring so it doesn't scorch on the bottom.) Cool completely and store in the refrigerator in a glass jar. Bring to room temperature before serving as a condiment for chicken, lamb or pork. It's also good on grilled tofu.
Posted by Jane Metzger at 8:12 AM No comments:

Apples In Our Future?

We've been most extraordinarily busy since my last post. A new subscription to Lancaster Farming brought us word of an auction in Allensville featuring a complete cider press. We traveled to the auction and were the winning bidder on the equipment but . . . the owner changed his mind about selling and we returned home disappointed and somewhat baffled. However, we're in conversation with a fellow in nearby New York state who is looking to sell an antique cider press.
Peas are in the ground and I hope to sow some lettuce, beets, onion sets, carrots and shallots in the next couple of days. Tomatoes, pepper and melon seedlings are happily established in the new greenhouse. Arthur built us some cleverly designed three-tiered wheeled carts so we can easily move the flats around. The greenhouse is wonderful!
The chicken peeps are growing and will soon be ready to move into the chicken house.
My next post will feature rhubarb....coming soon!
Posted by Jane Metzger at 11:37 AM No comments: