The snow was above my boots as I made my way through the garden to the high tunnel this morning. I unzipped the door and stepped inside to the now-familiar smell of damp earth. Snow had, for the most part, slid off the curved hoops and was deposited nearly five feet high on both sides, dampening the sounds from the outside. 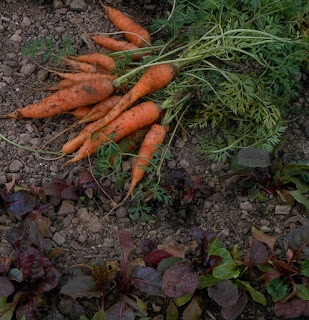 Many of the raised beds inside are empty now - with remnants of a few small shallots and dried stalks of basil I had tried to save after the other tender plants froze in October.  We had planted two beds to carrots in late August and I had made several staggered plantings of lettuce and Swiss chard after that. You can see the Swiss Chard above. It seems that the greens have stopped growing and are waiting for warmer temperatures and more light. It will be interesting to see what happens as the cold - and the light - strengthens. I harvested some broccoli florets - enough for a meal for the two of us - along with some parsley and sage.  Carrots were my biggest harvest - aren't they lovely?
Next year I'll be better equipped to plan for the winter harvest by starting the greens a little sooner and planting them nearer the middle of the high tunnel instead of on the edge as they are now.
We'll plant the bulk of the high tunnel to tomatoes, eggplants and peppers again in the spring adding plantings of herbs such as cilantro and basil and shallots from seeds. Our Farmers' Market customers begin looking for fresh tomatoes almost as soon as the Market opens in late May and, though I was pleased with being able to harvest tomatoes in mid-July, I'm aiming for a even earlier harvest in 2013.
Some of the carrots you see below are heading to the soup pot this afternoon but I've enjoyed some of their exquisite sweet crunchiness for my lunch! 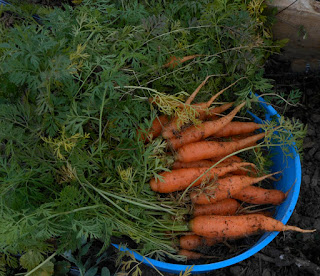 It's A Winter Wonderland!

It's winter on the farm! The predicted snowfall of 12+ inches came to pass and today we're working to first make paths and then put the tractor and snowplow to work clearing the way to the outbuildings. I'm waiting for a path to the high tunnel to observe firsthand the effects of growing green things (winter greens, Swiss chard, parsley and sage) in the presence of snow.
The chickens are still on strike and though one egg miraculously appeared on Christmas Day, the ladies are not enjoying this snow!
Our Christmas table groaned with the weight of lots of home-grown or locally-harvested foods including venison skewers, a wild turkey, roasted butternut squash with shallots and garlic, mashed potatoes and green beans.
We still have a good supply of wonderful organic potatoes in many colors, tastes and textures. We'll deliver, too!
The folks at the Genesee Environmental Center offer breakfast on Sundays – 8 a.m. to 1 p.m. – with our organic potatoes. Thanks are extended to Larry and Diana Hinrichsen for being such good customers and supporters of locally-grown produce.

The Return of the Light 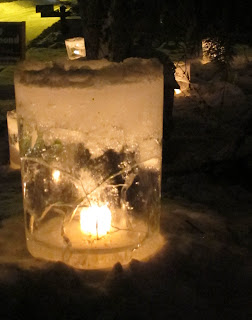 Many references to the light have come to me as I continue to walk through the darkness that evil can bring to one's life. My spirits were brightened this morning (Dec. 23) by the sunshine reflecting off the snow and the ice on the spruce trees that surround my farm home. My perch in the dining room offers me a view of the snow-covered orchard and a bird feeder offering sunflower seeds to a host of birds. Yesterday's winds have subsided and left random piles of snow, dotted with the ever-present pine cones and branches and pine needles. In all seasons, not a day goes by that I don't feel grateful for this place where I have been planted.
My oldest brother Steve and his wife Johanna created these ice candles to welcome the light in the Alaskan north where the winter darkness is even more pervasive. Our church family is working through its grief by planning a ceremonial sharing of the light on the night before we re-enter our sanctuary as a group for reconsecration. Perhaps similar icy sculptures will line the sidewalks that night (Jan. 5).

Posted by Jane Metzger at 11:02 AM No comments: