The Staff Of Life

Our wheat field was very small when measured against the standards of agribusiness - or even small scale farms. The wheat (a variety of hard red spring wheat named 'Glenn' and acquired from Lakeview Organic Grain in Penn Yan, N.Y.) was sown originally as a cover crop but as it ripened in the field, Arthur began to turn over in his mind ways to harvest our certified organic grain. 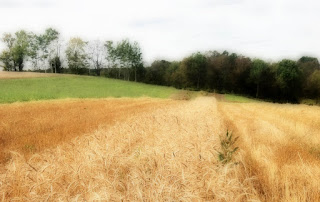 Our friend Jerry Houwer offered the use of an old Allis-Chalmers All Crop Harvester, Model 66, circa 1950s that was stored in his barn. And so one September afternoon, Arthur drove up Fishing Creek pulling the hulking orange apparatus.
Days were spent just getting it into shape - with the expertise of Bryan Morley and our neighbor Roy Thompson who just couldn't resist stopping by when he saw the vintage machine parked in the driveway. Roy brought firsthand knowledge, harkening back to the days he'd spent helping Don Stearns and Shorty Pepperman with their oat harvests on long-ago Crandall Hill summer afternoons. He even pointed Arthur in the right direction to find a pulley on a old combine on the Thompson farm.

On harvest day, Roy Thompson was joined by his son Rob (who took these photos) and even Jerry Houwer stopped by to watch.


From the very beginning, this grain project brought together many folks who share a heritage on our Potter County hilltop. Mike Snyder (who grew up just down the road from here) graciously transported the seed from Penn Yan to us on one of his trips to lend a hand to his son, John (proprietor of Olga's Cafe and Gallery in Coudersport).

This Crandall Hill heritage also includes this John Deere combine that rumbled along in these fields back in the 1950s.
Wondering what we're going to do with the organic wheat we harvested? I'll show you in the next blog post - somewhat reminiscent of the Little Red Hen.
Posted by Jane Metzger at 2:02 PM No comments:

Friday marked our last day at the Potter County Farmers' Market. It was a cold, damp day and all the vendors huddled around the courthouse square shivered and struggled with making change as the winds threatened to blow away our hard-earned dollars!
Preparation for this final Farmers' Market included the adding of this label to our business cards and produce bags. You could say it was a labor of love ...

And then there's the sign (laminated at the very last minute by our friend Andy Kulp at KOS). 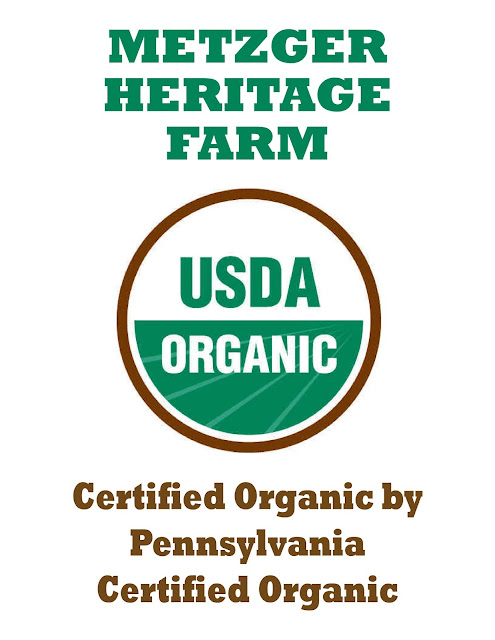 So ... do you think we're a little bit proud of this accomplishment? 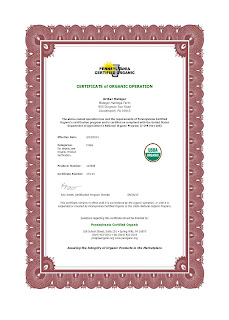