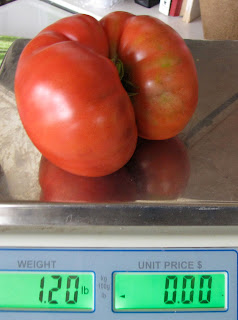 I almost hesitated to post a picture of this giant tomato because it definitely will not find its way to the Farmers' Market.
This fine specimen is a German Johnson. It has pinkish skin and dimples! Also known as German Johnson Pink, this heirloom is said to have come with immigrants to Virginia and North Carolina. Aren't heirloom tomatoes intriguing!
Heirloom tomatoes were once simply tomatoes. Those tomatoes are the ones folks grew in their home gardens, perhaps saving seeds year to year. Or tomatoes were grown on local farms, finding their way to your dinner table only in late summer. These tomatoes, with their soft skins that bruise easily, don't ship well.
These days, tomatoes are bred for mechanical harvest, bred to withstand shipping and bred for a long shelf life. That's why you can find tomatoes in the supermarket year round. Of course, you sacrifice taste and texture.
So what determines an heirloom variety? It's generally accepted that "commercial" heirlooms are varieties at least 50 years old. There are also family heirlooms, heirlooms created by crossing open pollinated tomatoes, and mystery heirlooms, a produtc of natural cross pollination.
We're growing many heirloom varieties, along with some carefully selected hybrids and they will find their way to market soon.
Posted by Jane Metzger at 11:27 AM No comments:

Every orchard needs bees. That's a fact that did not escape our Emporium friend Bob Stampee who showed up at our orchard gate a couple of years ago with a hive of honey bees.
Bob has been supporting our foray into beekeeping ever since, encouraging membership in the Beekeepers' Association, providing equipment, resources and his vast store of expertise.
The original beehive made it through the worst of the winter this year and on the unseasonably warm February days, bees were coming out to warm themselves in the sunshine. Fast forward to the fickle mont of March when a ferocious windstorm in March dislodged the top of their hive, something that wasn't noticed until some time had passed and alas, we lost the bees.
Upon hearing that sad news, Bob set out to find us more bees and last week, he showed up with this in the back of his van. 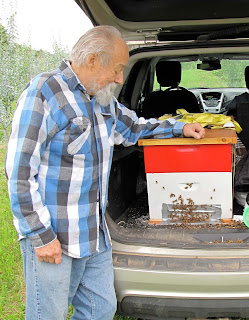 With Arthur and Laura's assistance, the bees were unloaded and established in their new home. We are looking forward to a long and happy relationship. 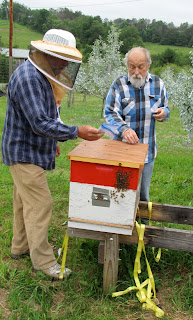 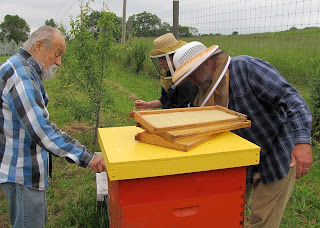 Posted by Jane Metzger at 12:09 PM No comments:


The first tomato of the season was harvested Saturday, July 1 and, neatly sliced, found its place on a BLT featuring home-baked whole wheat bread, bacon from the pig we purchased from neighbors at Thompson Farms, and home-grown lettuce. That superlative sandwich greeted me when I returned from a glorious vacation week at the Chautauqua Institution.
And for those of you who wonder which tomato won the coveted "first tomato of the season" honor .... the winner is .... Stupice! At least, that what the little stick planted next to the tomato told me. However, I'm thinking that perhaps there was a little mixup while planting seeds for the teletale question mark on the aforementioned stick was buried in the soil.  That big Silvery Fir Tree tomato that I was counting on was the second tomato of the year, harvested July 3.
Coming soon ... Gold Nugget cherry tomatoes.

Posted by Jane Metzger at 3:43 PM No comments: