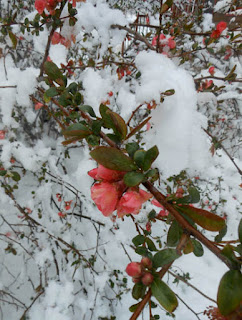 Since the northeast's big snow event on Monday and Tuesday, I've heard numerous references to "poor man's fertilizer".  I made reference to this in a phone conversation with my friend Louise and she told me she had seen it in the "Little House" books of Laura Ingalls Wilder.
And here it is from "Farmer Boy," Chapter 22.


That night Father said they’d seen the last of Indian summer. “It will snow tonight,” he said. Sure enough, when Almanzo woke the next morning the light had a snowy look, and from the window he saw the ground and barn roof white with snow.
Father was pleased. The soft snow was six inches deep, but the ground was not yet frozen.
“Poor man’s fertilizer,” Father called such a snow, and he set Royal to plowing it into all the fields. It carried something from the air into the ground, that would make the crops grow.

A Google search provides us with the following information: Snow contains nitrogen, a bit of phosphorus, plus traces of other elements. Commercial fertilizer lists a N-P-K ratio – Nitrogen (for greening), Phosphorus (root growth), Potassium (flowering).
Working the snow into the ground moves the moisture and nutrients deeper into the ground, plus they go to work to break up clods of soil into finer pieces.
Today the sun is shining and there are still patches of snow around though the gardens are clear. I've been working in the greenhouse the past couple of days repotting the tomatoes and peppers planted in seed cells in March. While it might seem early to talk about canning and freezing, I'm giving you notice that we are planning for a large crop of tomatoes this year. If you'd like to have a bushel or two for canning, it wouldn't hurt to get your order in early so we can plan for everyone. Remember, everything we grow is organic - which means you can be sure you're not including herbicide and pesticide residue in your jars!
Here's a photo of some of my tomatoes and please notice the snowy background outside the windows!

It's been snowing since last evening and the ground, trees, gardens and high tunnel are blanketed in the white stuff. I will head outside later and take some photos. The Japanese Quince bush next to the house had just burst into bloom and there is a poor robin perched there wondering what on earth has happened!
I am working happily in my snug office getting up to date with AgSquared, a  new record-keeping system for small farms that promises to bring farm management to a new level. I saw a presentation from the company's founders at the PASA Conference last year and signed up to become a beta tester.
Arthur is working to get the heavy wet snow off the high tunnel. The weather has surely added unwelcome complexity as we try to get this unheated greenhouse up and running. Last week the winds wreaked havoc with the zippered ends and even threatened to tear the structure from its moorings. Now it's the snow.
Stay warm and dry!
Posted by Jane Metzger at 1:28 PM No comments: 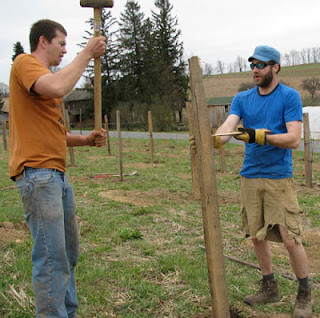 Cousins Blair and Joe took command of the tree stakes 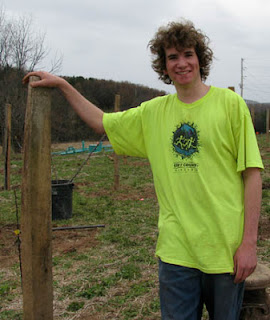 Jakob lent a hand and a smile! 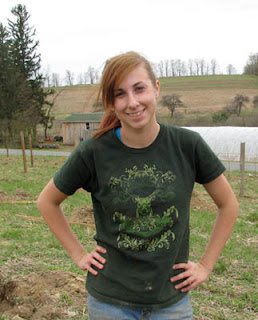 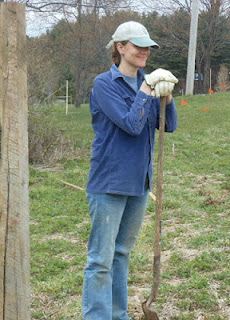 Nellie came from Wellsboro. It wasn't the first time she lent a hand on the farm!

I would bet that this woman has planted many a tree in her homesteading life. Thanks, Natalie. 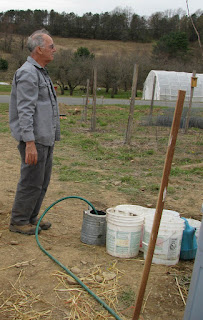 This gentleman came all the way from Arkansas to help in the tree planting. (He expects to find peas and other garden goodies when he returns home next week!)
There are also some other helpers who managed to avoid the camera - Barb and Connie, Wanda,  Dawn, Colton, Sarah and Jane.
When I say we couldn't have done it without you, I mean it very sincerely. Thank you!
Posted by Jane Metzger at 3:11 PM 1 comment: 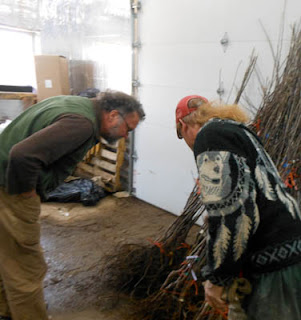 Arthur & I went to Cummins Nursery in Ithaca, N.Y. yesterday to pick up the bulk of our fruit tree order. Above Arthur is checking out some of the trees with Tony from the nursery. In the photo below, the truck is nearly loaded! 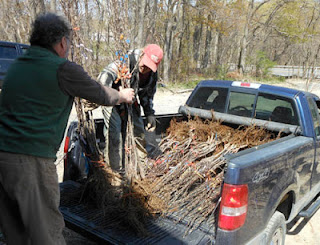 And beginning bright and early this morning, the planting begins. We've enlisted the help of friends and family and here are a couple of early photos. Check back for more as progress continues! 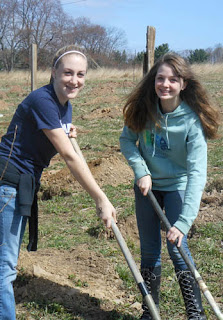 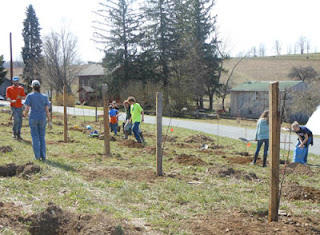 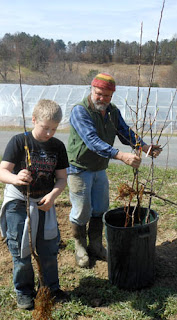 Posted by Jane Metzger at 12:13 PM No comments:

Why We Do It

We have just returned from a two-week stay with our grandchildren in eastern Oregon. "It's an ugly land," remarked Lowell, their next door neighbor, "but I like it." We've visited there often in the two-plus years since our daughter and her husband moved to Heppner. 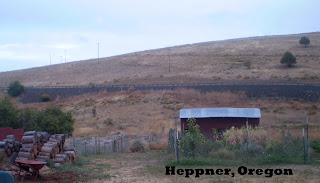 It's wheat farming country and the landscape of rolling hills seems barren except for irrigated fields where the crops are grown. Some trees grow along creek beds and in spots where they're tended in people's yards. But it's mostly brown because, unlike the verdant western part of that state, it doesn't rain much.
We traveled to Portland last weekend to visit Arthur's sister and her husband and our route took us through the Columbia River Gorge. On that drive along the river you experience the transformation gradually as the brown and gray gives way to endless shades of green. Of course, the green comes with a price as it seems to rain almost every day this time of year and it makes driving on the interstate a real trial!
I was looking through my computer photo files while we were in Oregon and I was drawn to this photo of our potato field taken early last summer. It was a reminder of why we live where we do and why we are doing what we do.

Linked to: Rural Thursday Blog Hop
Posted by Jane Metzger at 10:18 AM 3 comments: