Those last weeks of spring, when the temperatures have warmed and the sun is high in the sky, bring folks to the farmer's market in search of fresh vegetables - often looking for sweet corn, melons, tomatoes, peppers. What they will find are lots of greens, lettuce, spinach, chard, mustard, kale, arugula and turnips, radishes, rhubarb. And that's what our CSA customers found in those early baskets. 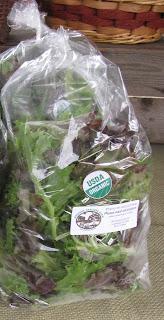 Laura and Rytz will tell you that they spent many hours selecting appropriate seeds, nestling them in small planting blocks in flats, transferring them to germination chambers, moving them under the lights in the heated greenhouse space and finally locating them in the high tunnel beds.
Having the CSA upped our game substantially this - both in terms of vegetable production and in preparing that food for the customers. While it became apparent early in the season that this was going to be the year that we invested in a walk-in cooler to preserve the bountiful apple crop ripening in the trees, other farm work claimed our time.
But when all three of the old refrigerators we had used for storage began to freeze everything, the time frame shortened.
We had first observed a Cool Bot at Quest Farm in Almond, N.Y. and a similar style of cooler seemed to be the best option for our operation.
(If you're interested in learning more, click this link to see how it works.)
Project Cool Bot Cooler moved into high gear as plans were drawn, materials sourced and purchased and  calendars (and space in the shop) cleared to begin construction.
Our long-time friend, Dr. Mike Aucott, who ran his own small farm operation on neighboring Niles Hill in the 1970s and 1980s, lent his wiring expertise and ran the proper wires to power the new unit.