Here's the conflict: Our early plantings in the high tunnel are being assaulted by these tiny creatures. 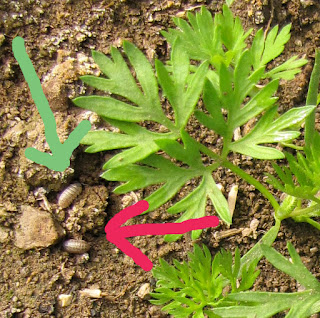 Do you recognize them? I would bet that you've encountered ubiquitous pill bugs (also known as rolly-pollies, sow bugs, doodle bugs, wood lice) in your backyard.
Our raised beds have turned into combat zones! Under the cover of darkness, these voracious armies swarm the tender little seedlings and attack! They've enjoyed a cozy life in the protected environs of the high tunnel, hiding under the wood and in all the organic material. If they had just stuck to the decaying wood and the dark dampness under the ground cover, we could have co-existed.
But now, it's war!
What's in our organic arsenal?
The first line of defense was diatomaecus earth. Not too effective but it did slow them down somewhat.

Yesterday afternoon we hollowed out reject potatoes and put them face-down in the earth around the plants.

This morning we plucked the potatoes from the soil and sent the pill bugs to a watery grave! We'll see if these deterrants will allow all the seedlings a fighting start.
How do you combat pill bugs in your organic garden?