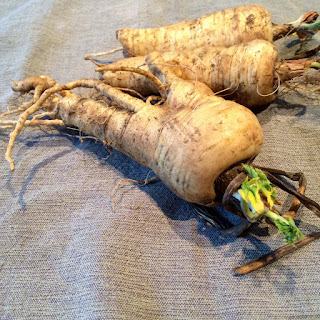 The Fedco Seed catalog quotes Gene Logsdon who suggested that humans have much to learn from parsnips about how to achieve long life.


"First cultivate an independent ornery reliability that will draw admiration from everyone. Second develop a distinctive personality as parsnips do, with a taste appreciated only by the discerning minority, not the herd-like majority, and third, don't try to look too pretty in public."

There is lots of folklore about parsnips in our Crandall Hill community. Much of it comes from the guy considered the consummate parsnip grower in these parts, Steven Snyder. Steven could be depended upon to arrive on the doorstep with a mess of parsnips just as soon as he could work the ground in the spring. "Get them in the pot as soon as you can," he advised ... and he was right. There is little that matches a dish of braised parsnips dripping in butter for a taste treat.
Steven also offered advice about parsnip seed, noting that one should be sure to use fresh seed every year. That advice is echoed in the Fedco catalog:


"Seed is short lived; if you are planning to use old seed, germ test in paper towels before sowing."

Steven's son, Paul, grows great parsnips in his garden patch every year and is generous to share with us in the years we haven't been successful in their cultivation. However, this spring, we're headed to our own garden patch to harvest this early spring treat.... and the pot will already be warming!
Posted by Jane Metzger at 11:06 AM