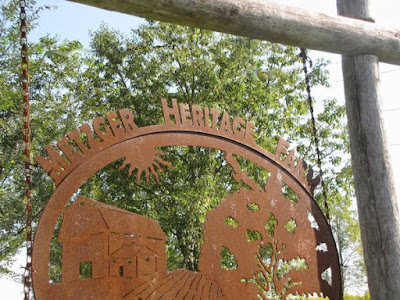 There was frost on the chicken coop one morning last week. Though the tomatoes and peppers escaped damage, some of the summer squash leaves bravely rising from the confines of a raised bed, were nipped. Up on higher ground in the orchard, the apples and pears shivered but rallied, especially after the rains of the past couple of days.

"A snowstorm on 4 June 1859, was followed by a killing freeze. All growing crops were destroyed – even the onions and the leaves on the trees. Fields of clover, nearly ready for hay, wilted and fell before the bright sun. Ice froze an inch thick. Burrel Lyman's orchard made history by maturing the one and only apple in Potter County. On the night of the big freeze, a mother robin had covered it in her nest. All  this reminded the old timers of the year 1816 which was so cold that all through the east it was known as the year of 'eighteen hundred and froze to death.' "

We'll be keeping a watch on the chicken coop overnight tonight as the jolly weatherman on Buffalo's Channel 2 just announced that there will be temperatures in the 30s tonight.