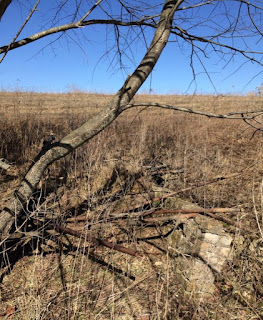 It's been a long time since anyone's made maple syrup here at Metzger Heritage Farm. Arthur carries long-ago memories of tapping the trees in the sugar bush and boiling the sap down in big flat pans on an arch that stood in the field behind the little house. This tumble of fire bricks and pipe is all that's left these days.

Many of the old ways were familiar to my grandfather, W.D. Fish, who grew up in nearby Allegany County, N.Y. and shared a heritage of country ways. His words captured the imagination of thousands of readers of his weekly "Golly" column in The Potter Enterprise.

"Wonder if any one who reads this column can remember boiling maple sap in a big cast iron kettle!
The sap was caught in wooden buckets. There were no bucket covers. Millers by scores would drop into the buckets. When rains came, water would run down over the bark of the tree and into the container. Straining the sap removed the millers but it could not take the color from the rain absorbed from the bark of the trees.
The first deposited its share of foreign matter in the boiling along with ashes from the fire.
The result was maple syrup of the black-strap variety and the sugar of a very dark mahogany color.
There are people to this day who think maple suyrup and sugar must be dark in color to be genuine.
The black strap syrup of those days may have lacked much in the cleanliness of manufacture but --
How good it was!
It was wonderful, too when the salted cucumbers were brought up from the barrel in the cellar, freshened from the brine and sweetened with that fine black maple sugar. It added color and flavor.
Those who have never eaten pickles sweetened with good old black maple syrup have missed a real treat.
Golly wishes he might have a good big stone jar of 'em right now to whet his jaded appetite."
"
Posted by Jane Metzger at 9:02 PM

What a great piece of history on maple syrup for me to relay to my grandchildren as I collect and boil sap. And I can't wait to try that recipe on the last of my pickles from last fall.