This is the pantry of one-time Niles Hill homesteaders, and good friends, Mike and Louise Aucott. The pink arrow direcs your attention to jars of dried beans - dried beans that were grown on Metzger Heritage Farm.

Dried beans have an impressive nutritional profile. In addition to lots of protein, they also bring manganese, fiber, B vitamins and iron to the table. Some studies show that a higher legume intake is the most protective dietary predictor of survival among the elderly. Beans and greens are the foods most closely linked in some studies as being protective against cancer, diabetes, heart disease, stroke and dementia. 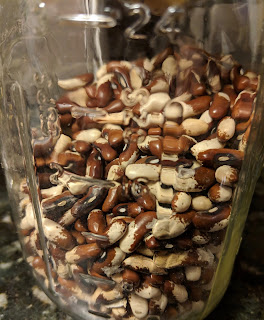 These are known as Painted Pony (or brown mare bean because of its half brown and half white marking).  I'll allow Louise to tell the story received in an email on the same day I was posting about Bird Egg Beans.


Years and years ago, Metzgers gave Aucotts a big bag of soldier beans still in their shells. We let them dry *thoroughly* and shelled them during World Series games, then (oh horrors) forgot they were there. But....tonight I made them into baked beans and they turned out to be DELICIOUS! Thank you Metzgers! Rounded out with corn pudding from our own Niles Hill corn. 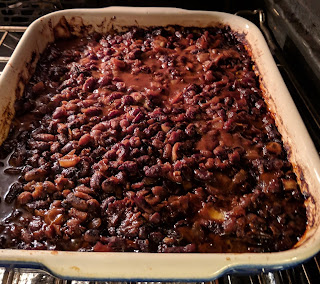 Now when Louise says years and years, I figure that it has to be at least seven years. I can remember where I grew them and I remember that I planted several long rows and we harvested about two big barrels of the beans in their pods. How happy we were to offload (I mean share) them.

I have to admit that there is still a feed bag bulging with beans hidden away in a cupboard down in the shop if the chipmunks haven't found a way in.

I'm planning to try several varieties of shell beans in the 2019 garden. Do you have any varieties to recommend?

For those of you interested in planting your own Painted Pony beans, here's a link with information. And who knows...years and years in the future, it might be you pulling a jar of beans from your pantry shelf to transform into a nutritious and tasty dinner.