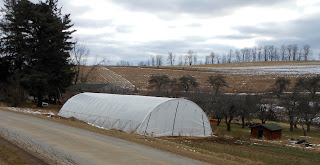 "One of the most delightful things about a garden
is the anticipation it provides." - W.E. Johns
I took this picture of our new high tunnel last week before Friday's snow event. The tunnel occupies much of the garden space between Dingman Run Road and the "little orchard." We have three orchards on the farm and this little orchard was planted in the 1950s. Arthur recalls that these trees (mostly Golden Delicious with one Macintosh and a sprinkling of Red Delicious) were part of a package deal offered by a nursery in nearby New York State. Several of our neighbors also purchased and planted similar orchards at the same time. Also visible in this picture on the hillside are the Northern Spy trees. These venerable old friends provided a bountiful supply of those tart apple favorites for several generations of Mattesons and Metzgers. I was standing in the "new orchard" to take this photo. There are 20 apple trees planted last spring and this year, we have ordered many more new trees that will be introduced to Crandall Hill this spring. It is up to Arthur to post about the apples and such but today he's out in the orchard, pruning tools in hand, as he works to tame the long-ignored apple trees.

You are going to LOVE your high tunnel!